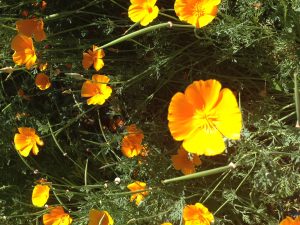 When the heat of summer finally hits, it is an adjustment for folks here in the Northwest. We want to swim in the lake and just kick back. But regular life has a way of sticking around and you now have to do everything in very HOT dry weather. I remembered that my car air conditioner was broken just about the time I was ready for work and the inside of my car was 101! Everybody wants water and cool drinks and a place to get out of the heat. Birds gather around the sprinkler and the cat lays on the cement patio stretched out on a wet area of shade. These are the days we all dream about during the dark and cold winter. Hot days come on quickly and seem to only last until you are getting used to the new routine. Closing all windows and drawing the curtains keeps out the heat.

The garden grows so fast you can hardly keep up. It is too hot to cook, so you nosh on fruit, eating as many cherries, strawberries and raspberries as you can. Hot meals seem to be part of winter. I salute the glorious heat, and revel in the majesty of the butterflies, dragonflies, bees, flowers and an abundance of fresh food! With Gratitude in my heart, I count my blessings and post this to my blog! 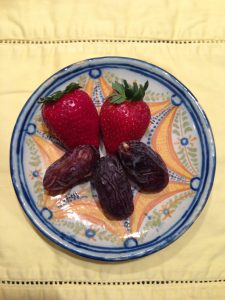 This year, I was able to take my first trip to Madrid and Paris. It was different, for me, to get away from my local winter and share a Spanish Winter. There were very few crowds in art galleries and traveling by Metro was convenient. All the “other” tourists seemed to have different locals in mind. Our lightweight, down, packable jackets and vests made it possible to stay warm in the mild Madrid and Paris Winter; with our umbrellas we were good-to-go!

Pictured: A breakfast Pottery plate from Talavera de la Reina with fresh fruit from a Fruteria (fruit shop) in Batán; which offered many sweet delights My favorite was the Moroccan Strawberries and Moroccan Jumbo Medjool dates; so amazingly sweet and fresh. 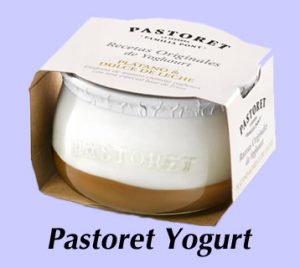 The Pastoret Yogurt (http://pastoret.com/en) from the Market of San Miguel – near La Plaza Mayor – was a great addition to my breakfast. This, naturally cultured, yogurt is creamy and comes in a glass jar. The flavor choices were delightful. And, I have to say, the Market there is a “do-not-miss stop” – even with the tourist prices.

The Summer garden is flowering, sending wonderful scent molecules into the air. The Bees are happy and my Lavender is in its second bloom. The first flowering is cut and dried and getting ready to transform any number of products at FallingRiver with its much loved, clean, relaxing fragrance and deep, purple color. Wikipedia thank you for this: “Lavendula is a genus of 39 known species of flowering plants in the mint family Lamiaceac.”

I am currently growing English Lavender, French Lavender and Lavandin.

We use Lavender here, at FallingRiver, for its clear fragrance but also for its antibacterial properties. It has been a favorite scent for men and women since Medieval times. Paring the Lavender Essential oil with citrus oils like lime, tangerine, and orange is one of our customer favorites, we call it Citrus Lavender. I like Lavender Essential oil mixed with a touch of Patchouli and a hint of citrus. Lavender is found in several of our body butters, scrubs and soaps. One of our specialty soaps “Lavender Provencel” has the buds in the bar. A soothing refreshing Natural Scent in the garden, in the kitchen or in the bath Lavender can find a place.

Use a small organdy bag filled with the dried buds

and put it into a lingerie drawer, for a beautiful lingering scent, or hang a bag in your closet to help keep moths away. Put it into the dryer to freshen towels and sheets, or just give it to a friend to freshen their car or linen closet. There is no end to the creative projects a true Lavender enthusiast can come up with.

I will leave you today with a lovely easy Vinegar Rinse for normal hair: 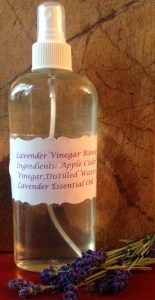 Put all into a squeeze bottle and use as a final rinse for shiny hair.

Send us some of your favorite Lavender ideas and make the bees happy; plant more Lavender!

The Mint family provides us with many wonderful opportunities to enjoy fresh or dried herbs regularly in daily life. We can make teas, use fresh mint in recipes like tabouli, combine it with other flowers and make scented potpourris, or we can use the essential oils for everything from perfume to spider repellant. The truly wonderful “Mint” group of plants, includes members like Catnip, Lemon balm, Spearmint and, of course, the most prominent – Peppermint. Yes, Laminate as a family, provides the home gardener with a great group of leaves.

I am celebrating Lemon Balm today as I have cut several arm-fulls and I’m preparing to dry them. One important note for any gardener who is unfamiliar with the Mint family of plants: they SPREAD and SPREAD, so make sure you are a fan before you plant and consider devoting a section for them only. We have quite a group of herbs in the family: There is Summer savory, a Mediterranean native that is much loved by bees; and Sweet Marjoram, which grows wild on the hillsides of Asia. Marjoram was a favorite of the Ancient Greeks, who called it a name meaning “joy of the mountains” – being found in abundance within mountain meadows, all over the country, including the islands.

I digress, so I will amble back to Lemon Balm:

Lemon Balm {Melissa officinalis} is considered to be a calming herb, with great antiviral properties. “It has mention in herbal literature as far back as the Middle Ages. It was used to reduce stress and anxiety, improve appetite, ease pain and discomfort from indigestion, including gas and bloating as well as colic.” {Maryland University} Adding the dried leaves to a tea which could include valerian, chamomile or hops is a good way to enjoy the calming effects of this easy-to-grow herb. In Europe, you can find it in creams – which are used to treat cold-sores.

In the garden, Lemon Balm can be an easy-to-grow perennial. You can get a start from a friend that can be a root cutting and it will thrive and spread rapidly as it propagates from seed as well as root. It will form a stalk in late summer that has lovely, whitish, tiny flowers that bees love. After they fade, each stalk is filled with many seeds, and since you will have many, many, many, stalks, you’ll get some idea of how quickly it will spread after the first year.

Chew some leaves for a breath freshener, or make some refreshing tea. The wonderful, fresh, lemony scent will inspire you to find new recipes for eating and cooking. It is also a great, useful plant for soap makers who might use the tea instead of water in cold process recipes and other DIY beauty products 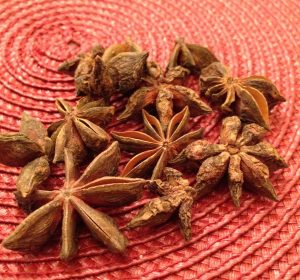 If the picture of a warm cup of tea is appealing to you then I invite you to try adding Lemon Balm Tea to your herbal tea choices. Dry your lemon balm leaves and find a favorite jar to store the tea in. Mine is an old canning Jar I have had with me for a while. I mix about a quart of leaves with 1/3 cup of Star Anise and some dried Orange Peel. To make a cup I take a handful and put it into my tea pot and pour 4 cups of boiling water over and let it steep about five minutes. Strain it into a cup an add a touch of honey and enjoy ! 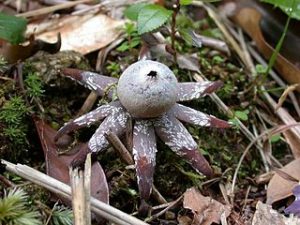 Which one means: Attracts water?

Your spell-checker will not help you out this time.

Glycerin soap is desirable because, those of us who use soaps rich in glycerin, are seeking a way to hydrate the skin after we bathe.

For this reason people say that glycerin is hygroscopic. Spoken, we might think they said hydro- because we are used to that word combined with something to do with water (hydroplane, hydroelectric, hydrotherapy, hydroponic). There is a device for taking pictures underwater called a hydroscope, hence the correct spelling of the word hydroscopic.

Glycerin-rich soaps are HYGROSCOPIC. I, myself have made the error of using the prefix, “hydro-” when talking and writing.

So, both words are REAL but only one means, “attracts water”. Let’s hope no one who makes those standardized tests for schools finds out about this one!

Can soap be interesting and practical?

At FallingRiver Soap, we think so.

Usually, soap is for getting clean. For many, it is about pleasing scents. For some, it concerns skin health. Perhaps it can be all of these . . . and more.

FallingRiver is providing soap that is organic. This means the ingredients are easy to understand. These products are made to standards that have been time tested. Glycerin-rich soaps have been cleaning for thousands of years. Medical science is doing studies and finding benefits and therapeutic value from natural soaps and shampoos.

In today’s world, our soaps are for those who want something that is special.

You may enjoy the unique scent created when we combine our soaps with essential oils made from sources like flowers, fruits and herbs.

You may be seeking a personal solution for yourself and wanting a mild soap that is well balanced. Many of our soaps are designed to clean well and be gentle.

Our hope is that our products make your life easier and healthier.

Are you careful about the amount of toxins entering your body? Eating healthy foods and drinking clean beverages are important. Fresh air and exercise helps maintain a healthful lifestyle.

The skin also absorbs toxins too. Deciding what kind of soap to use, means being aware of the ingredients your soap was made from. Organic soap has the value of being made with ingredients you can understand. Using organic products is one more way for you to enjoy a lifestyle that shows you care.

Why Use Organic Soap?

Soaps made with organic ingredients are free from herbicides, chemical fertilizers and pesticides. They are certified by the National Organic Program (USDA-NOP).

According to researchers at the Medical College of Georgia:
Glycerin, commonly found in skin care, attracts water and helps skin look better and ingredients in organic soaps may have therapeutic value as well.

Try organic soaps and discover for yourself why we love them!